Polyimide (PI) is a kind of high molecular polymer containing cyclic imide groups in molecular chains. It can be divided into homo-benzene type PI, soluble PI, polyamide-imide (PAI), polyether. Imine (PEI). As a special engineering material, it has been widely used in aerospace, microelectronics, separation membrane, laser and Other fields. In view of its excellent performance, it is also known as "the expert in solving problems". It is generally believed that "no microelectronic technology will be available without PI".

The PI monomer is synthesized from a dibasic anhydride and a diamine, and is subjected to low-temperature polycondensation in a polar solvent to obtain a soluble polyamic acid, which is formed into a film or spun and heated to about 300 Â° C to be dehydrated to form a ring to be converted into PI; Products are mainly used in film, coating, fiber, engineering plastics, composite materials, adhesives, foams, separation membranes, liquid crystal aligning agents, photoresists, etc., and can be applied to aerospace, electrical insulation, liquid crystal display, automotive medical, atomic energy, Satellites, nuclear submarines, microelectronics, precision machinery packaging, etc.

PI technology is an oligopolistic situation around the world, and the technology is tightly sealed. PI film is developing well, and there are many giants with technology, but PI film still belongs to high-tech barrier industry. At present, global production capacity is still dominated by a small number of foreign companies, including DuPont, Japan, Zhonghua, Korea SKPI and Japan Ube Industries Co., Ltd.

PI fiber, PI coating, and PI engineering plastics technology are concentrated in the hands of only a few companies, almost monopolizing the market. For example, the supply of PI fiber is mainly concentrated in P84 fiber of Evonik in Germany and Polyester fiber of Changchun Gaoqi in China. Its application field is wide and the demand market is expanding.

The United States, Europe, and Japan are the most important consumer markets for PI in the world. For example, the major consumer sectors in the United States are plastics; Japan's main consumer segments are thin films and plastics; and the Asia-Pacific region will be the most important growth market in the future. With the rapid development of aerospace, automotive, electronics and other fields, the application field of PI has been expanding, and the market to be developed is huge. Marketsand Markets expects flexible printed circuits to become the largest and fastest growing application segment in the global PI film market between 2017 and 2022; in the global PI film market in 2016, electronics and automobiles accounted for the first and second market share respectively. The aerospace industry is expected to grow significantly between 2017 and 2022; in the future, the Asia Pacific region will become the largest PI film market, with China, India, Japan and South Korea being the mainstays of the PI film market in this region.

At present, the foreign PI industry is concentrated in a small number of enterprises in a few countries. For example, PI fiber products are mainly produced and sold in Evonik, Germany; PI film technology is in the hands of DuPont, Zhonghua and Ube. The PI products of Saudi Basic Industries and South Korea's SKPI also have a place in the world market, each with its own advantages.

PI technology barriers are high, and companies have strict protection of intellectual property rights. On May 24, 2017, the US SKPI US branch infringement of the Japanese bell chemical PI film intellectual property case finally settled. The case lasted for two years, and the US local court ruled that South Korea's SKPI compensated Japan's Zhonghua for about 13.49 million US dollars.

At present, the global PI market is developing steadily. According to DuPont's third quarter 2017 financial report, VespelÂ® engineering plastics are gaining momentum in the aerospace and electronics markets; Ube's financial statements for the first half of 2017 indicate that PI business is increasing due to sales of circuit board-based films. Bullish

Zhonghuaâ€™s financial report for the first half of 2017 also pointed out that as the demand for new models of smartphone manufacturers will increase production capacity and promote the sales growth of PI film, the supply and demand system of PI film will be adjusted in time according to the development of digital devices.

All major companies have increased their research and development efforts, and strive to introduce new ones, but there is no such thing as an increase in production capacity. On November 14, 2017, SABIC announced that it will introduce a number of differentiated products based on high performance material combinations in 2018, including filaments of EXTEMTM thermoplastic polyimide (TPI) resin.

Ube's fiscal year 2017 report stated that it is necessary to get rid of the PI deficit situation, and the film temporarily maintains the status quo and accelerates the research of coatings. Ube's mid-term business plan decided to re-examine the business model for the PI business, rebuild the business, focus on the development of flexible display materials in the coatings, increase the market share of the circuit board (FPC) in the film and expand the sales of double-sided COF film.

Due to the high production cost of PI, complicated technical processes and poor product stability, China's industrialization process is slow. However, the application of PI in China has been extended to aviation, aerospace, microelectronics, environmental protection, transportation and other fields.

China's PI industry is spread all over the country, and strong enterprises are concentrated in Taiwan, the Pearl River Delta and the Northeast. Taiwan's Damai Technology also has a certain share in the world market, and its revenue is also rising. Changchun Gaoqi's polyester fiber and original special paper are all in the world's leading level in technology. Other companies rely on research institutes, and both R&D investment and production input are concurrent.

However, compared with advanced foreign countries, there is still a certain gap in the overall strength of domestic enterprises. Throughout the enterprises, the scale of the installation is small, most of the production equipment is only 100 tons; the products are relatively single, mainly based on PI film, the other types of production are few; the product is not refined enough, the application field is mainly film and molding compound .

Major producers of PI film in China and their products, technical capacity, research and development information: 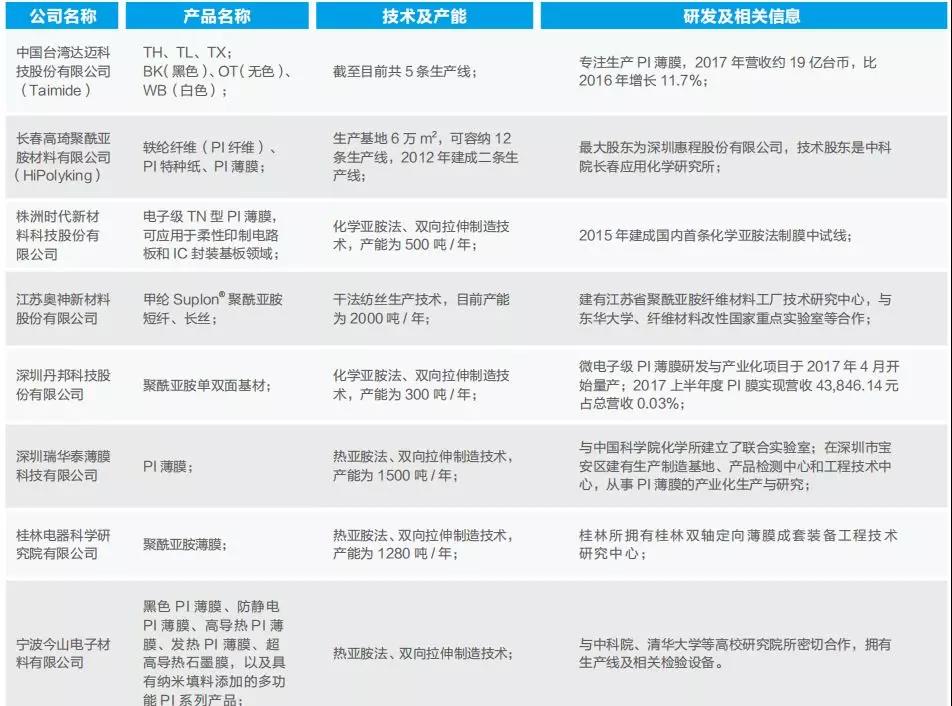